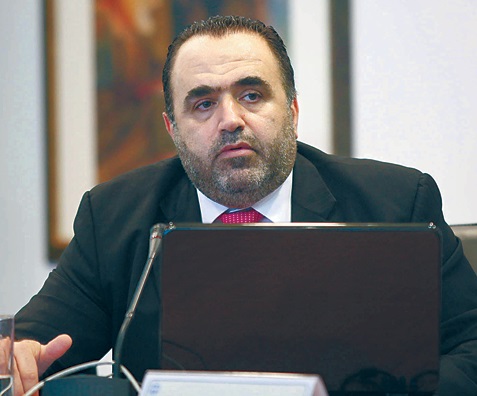 Major-General
Head of the Department of Electronic Crime, Greek Police.

He has worked in the police force for 32 years, 25 of which have been devoted exclusively to the investigation of electronic crimes.

He studied Computer Analysis and Programming and was trained in London in Plastic Crime. He was also trained by the FBI in matters related to Cyber Terrorism.

He had dealt with more than 7,500 serious cases related to cybercrime by 2014.

Between 2001 and 2014, he took part, as a core speaker, in 848 national and international conferences organized by Interpol/Europol, University Institutions/International Organizations/Multi-National Companies and so on.
He has organized and spoken at 3,500 one-day events through tele-conferences which have been held in all the schools in Greece and at the same time has organized and been a core speaker in more than 218 conferences and one-day events a) in the educational institutions of Greece, at all three levels; b) in various towns in Greece, explaining safe Internet navigation. In 2012, 2013 and 2014 he was one of the organizers of three conferences for the World Internet Day, which enjoyed international resonance.

He teaches at the Police Academy, at the Staff Colleges of the Greek Police and at the Hellenic Naval Academy.

A) by the President of the Republic for his outstanding social contribution to Greece.

B) by the Ministry of Defence for his contribution to Internet research in the Greek Armed Forces.

D) by the Ministry of Education for preventing suicides among young people, school pupils and students through the Internet (1008 before 1/8/2014)

E) by UNICEF, as Guardian Angel to our children

F) by the FBI- three times- for the investigation of Internet crimes, twice involving child pornography and once for smart cyber crime.

G) by a variety of public and private agencies, municipalities in Greece, organizations, associations and schools for his contribution to combatting Internet crimes, as well as for educating school-children on safe surfing on the Internet.

H) and, finally, on 8/7/2014 by Facebook, which publicly honoured the Department of Electronic Crime and its Head for the detection of a serious cybercrime which had an international impact on cyberspace.

He has written two books:

b) Internet Crime and Punishment, in which he sheds light on new facets of cybercrime.