Warning: A non-numeric value encountered in /var/www/dmopc15.com/wp-content/themes/thekeynote-v1-00/include/gdlr-admin-option.php on line 10
 » Metropolitan Porfirios of Zagreb 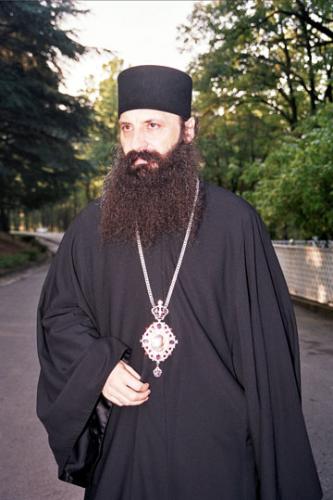 He was born on 22 July 1961 in Becej, South Bačka, Serbia, to Radivoy and  Radoika Perić and was baptized Prvoslav. He went to primary school in Čurug, and secondary school in Novi Sad.

On Thomas Sunday, 1985, he was tonsured as a monk in monastery of Visoki Dečani, by his spiritual father, hieromonk Irinej (Bulović).

He graduated from the Faculty of Orthodox Theology in Belgrade in 1986, and in the same year, on the day of the Holy Spirit and in the monastery of the Holy Trinity in the village of  Mušutište, he was ordained hierodeacon by Bishop Pavle (Stojčević) of Raška and Prizren. He then moved to Athens for his post-graduate studies in the field of New Testament Studies at the Theological School of the University of Athens, finishing in 1990.

In 1990, with the blessing of Bishop Irinej of Bačka, he returned to Serbia, and on 6 October moved into the monastery of the Holy Archangels in Kovilj. In the same year, on the day of the Synaxis of the Chief Captains of the Heavenly Host Michael and Gabriel, he was ordained to the priesthood. The brotherhood quickly expanded with new monks arriving and Hieromonk Porfirije was appointed abbot of the monastery. Apart from his duties within the monastery, he also participated in a variety of forums with numerous speeches, while his specifically theological concern has been directed against religious sects.

On 14 May 1999, at an extraordinary meeting of the Holy Synod of Bishops of the Church of Serbia in Belgrade, he was elected Bishop of Jegar, Vicar of the Bishop of Bačka. His consecration took place on 13 July in the same year.

In 2004 he submitted his doctoral thesis, entitled ‘The possibility of knowing God, according to Saint Paul, on the basis of the interpretation of Saint John Chrysostom. at the Theological School of the University of Athens.

On 29 July 2008, he was elected chairman of the Board of the Broadcasting Agency of the Republic.

On 24 May, 20014, by a decision of the the Holy Synod of Bishops of the Church of Serbia, in Belgrade, he was elected Metropolitan of Zagreb and Ljubljana.

On 13 July, 2014, in the Cathedral of the Transfiguration he was enthroned as Metropolitan of Zagreb and Ljubljana by His Holiness Patriarch Irinej.