Warning: A non-numeric value encountered in /var/www/dmopc15.com/wp-content/themes/thekeynote-v1-00/include/gdlr-admin-option.php on line 10
 » Metropolitan Ignatios of Dimitrias 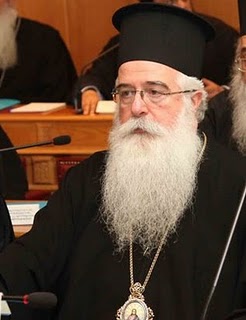 His work has focused mainly on young people. He organized and was in charge of the Youth Office of the Metropolis of Piraeus and he established camping and other pastoral programmes for young people. He was also the Vice-President of “Syndesmos”, the World Fellowship of Orthodox Youth.

He helped usher the Church into the world of the media by publishing the journals PIRAIKI EKKLISSIA and ELPIDOFORA NEIATA, by organizing and heading the radio station PIRAIKI  EKKLISSIA 91,2 FM and of the television programme ARHONTARIKI, which he has been presenting since 1992. At the same time, he edited a radio program for ERA-5 for five years for Greek emigrants throughout the world. He also served as spokesperson for the late Archbishop Christodoulos of Athens and All Greece.

As someone with a particular interest in the relationship between the Church and society and science, he served as a member of the National Transplant Council, took part in medical and scientific conferences, where he expressed the views of the Orthodox Church, and was also a founding member of the Piraeus Association of Scientists.

On 10 October 1998, he was consecrated Metropolitan of Demetrias and Almyros by the late Archbishop Christodoulos of Athens and All Greece and enthroned on 14 November 1998. Since then, he has continued Archbishop Christodoulos’ work in Volos, in the youth, charity and missionary fields, while launching a series of new projects, which have contributed to a fruitful dialogue between the Church and the local community.

Some of these projects are:

–        The foundation of a school, Saint Apostolos the New, that includes a Nursery school, Kindergarten, Elementary and Secondary school. The Church has thus set out its own proposal for the education of our young people, a combination of the state syllabus with the ethos of our tradition.

–         The establishment of the Thessaly Conference Centre.

–        The NGO Doctors of Charity, which organizes medical and social projects with the co-operation of the Orthodox Churches of the Balkans, Eastern Europe and Africa. Doctors, nurses and members of the clergy volunteer to help people in need, expressing the Church’s caring attitude, which embraces people throughout the world..

–        The Volos Academy for Theological Studies, which helps communicate the views of the Orthodox Theology to the modern world, without fear, recognizing truth of our faith.

–        Operation of educational programs for priests, Church officials, parents and educators, aiming at the spiritual development and assertive presence of Christians in the modern world.

–        Support for specific groups of people through the establishment of the Home for Alzheimer patients, the soup kitchen DOS IMIN SIMERON (“Give us this day”),  and a specific contribution to the integration of economic migrants.

–        Encouragement of voluntary services and the mobilization of the laity in the life of the local Church.

In addition, he is the President of the Hellenic Bible Society and Vice-President of the World Bible Society. He is a member of the Synodal Committee for Inter-Orthodox and Inter-Christian Relations and of the National Board of Education, as representative of the Church of Greece.