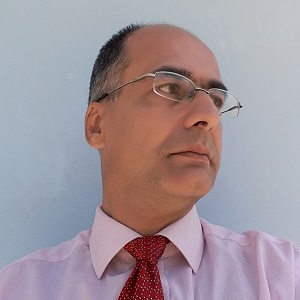 Theologian, General Secretary of the Panhellenic Union of Theologians, head of the Internet site www.zoiforos.gr.

He was born in Panayiouda, Lesvos and now lives in Mytilini with his wife, Eleni Myroyianni, an English teacher, and their four children. He is a graduate of the Theological School of the University of Athens and gained his post-graduate degree in Christian Pedagogics and Catechitics at the Department of Theology of the Theological School of the Aristotle University of Thessaloniki, his thesis being entitled: ‘The Proper Guidance for Children and Adolescents according to Saint Païsios the Athonite’. He has worked in Secondary Education since 1992. He was head of the Centre for Guidance and Counselling for the three years from 2009 until 2011. He is a collaborator on the Internet /preaching effort of the Holy Metropolis of Mytilini, president of the Union of Theologians of the Prefecture of Lesvos since 2005 and General Secretary of the Panhellenic Union of Theologians since 2014.  He regularly writes articles for the local press in Lesvos in Church  publications. He is editor-in-chief of the journal KOINONIA of the Panhellenic Union of Theologians and edits the Internet site www.zoiforos.gr.