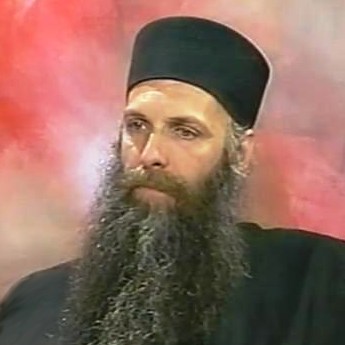 He is a founding member of various social institutions, such as that of the promotion of Voluntary Blood and Organ Donation, as well as of the Christian Association of Scientists, Thessaloniki.

He has served as a Scientific Associate with the Psychological Society of Northern Greece and today he is a Scientific Counselor for the Greek SOS Children’s Village (in Filiro), which is based on the Greek Orthodox tradition and education.

He has given several speeches and has published his work on psychological and theological matters and he has taken part in TV and radio shows concerning psychology and problems relating to children and families, as well as the Holy Light.

He has written the books “Answers to Responsible Parents” (Apostoliki Diakonia, 3rd edition 2008), “Therapies for the Possessed” (Thessaloniki 2004), “The Holy Light at the Tomb of Christ” (Synaxari 2008).

In 1994 he was ordained a priest-monk by Avgoustinos. the former Metropolitan of Florina. He does not hold a paid position in Thessaloniki but celebrates in the Church of St. Athanasios (87 Egnatias St.), as well as in dependencies of the Holy Mountain.

Grains of Orthodox pastoral experience from two decades on the Internet