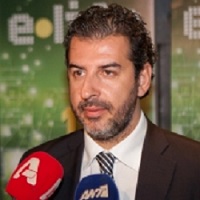 Konstantinos Siomos is a Child and Adolescent psychiatrist with a PhD from the School of Medicine in the University of Thessaly entitled: “Adolescent addiction to personal computers and the Internet: psychiatric symptoms and sleep disturbances”. He holds a masters degree from School of Medicine of Ioannina University in Social Psychiatry and Child Psychiatry. He was responsible for the planning and organization of the first specialist outpatient unit in Greece for Internet addiction in the Child and Adolescent Unit of the Hippocration Hospital of Thessaloniki from September 2008 to April 2010. He has extensive experience in the diagnosis and treatment of Internet Addiction Disorder, having managed numerous clinical cases of addicted adolescents. He was twice invited, as a specialist scientist, to the Greek Parliament, on March 2008 and July 2011, to appear before the Standing Committee on Research and Technology and the Standing Committee on Equality, Youth and Human Rights respectively and participated in their proceedings. He submitted survey data for adolescent Internet addiction and proposals for the design of a national policy to protect youth from the dangers of new technologies. Dr Siomos has participated in over 30 publications in international and Greek journals and presented numerous papers in International and Greek Conferences. He is also a referee for scientific research journals on issues related to Internet addiction, including the peer-reviewed journals of Cyber Psychology and Behaviour, Child Psychiatry and Human Development, Environmental Research and Public Health and Yonsei Medical Journal. He has also evaluated scientific proposals for financing in the field of Internet addiction disorder. As scientific supervisor he has led numerous research and training activities, including those in collaboration with the Hellenic Ministry of Defence (2014), the Education and Health Ministries of Cyprus (2011 and 2012). Since 2011 Dr Siomos has been involved in educating the public in cooperation with the Computer Crime Unit of the Hellenic Police force. He is a founding member and President of the Greek Association for the Study of Internet Addiction Disorder based in Larissa (www.hasiad.gr). Since the establishment of the Association in November 2008, Dr Siomos has participated in more than 300 public activities aimed at educating and training health professionals and raising public awareness about the new phenomenon in Greece and Cyprus. Dr Siomos has presided over the organizing committee of three Panhellenic Conferences with international participation, in 2009 in Larissa, in 2011 in Thessaloniki and in 2013 in Athens. He edited the publication of three collective themes projects a) Research-prevention-management of risks in Internet use (2011), b) Internet addiction and other online risk-behaviors (2012) and c) Benefits and risks in Internet use (2013). Dr. Siomos currently resides in the city of Larissa where he holds his private practice.