Warning: A non-numeric value encountered in /var/www/dmopc15.com/wp-content/themes/thekeynote-v1-00/include/gdlr-admin-option.php on line 10
 » Metropolitan Savvas of Pittsburgh 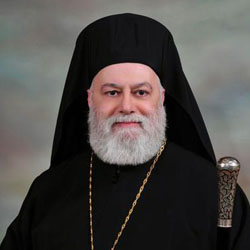 Metropolitan Savvas (Zembillas) of Pittsburgh  was born in the town of Gary in Indiana on 11 June 1957, the second of the six children of Skevofylakos and Stamatia (Georgiadi) Zembillas, who came from Kalymnos and Cyprus respectively.

He graduated from Adrian High in the neighbouring city in 1975 and went on to study at Colby College in Waterville, Maine, from which he graduated in 1979 with a BA in Philosophy and English. He enrolled in the Holy Cross Greek School of Theology, Brookline, Massachusetts, graduating in 1984 with a Master of Theology degree, summa cum laude. He served as a lay assistant at the church of The Holy Trinity/Saint Nicholas in Cincinnati, Ohio between 1985 and 1987, thereafter continuing his academic studies at Oxford (1987-94), under the supervision of Bishop Kallistos (Ware ) of Diocleia. His research was directed towards important figures and texts in the history of Early Byzantine monasticism. During his time in Oxford he served for two years as assistant to the head of the ‘Saint Theosevia’ Centre of Christian Spiritualty and for three years as warden of the House of Saint Gregory and Saint Macrina, a centre for contemplation and gatherings, under the auspices of the Fellowship of Saint Alban and Saint Sergius.

He was ordained deacon on 21 November 1992, the feast of the Entry of the Mother of God, and priest on 8 January 1995 in his home parish of Ss. Constantine and Helen in Merrillville, Indiana, by Iakovos, the then bishop of Chicago. For two years as a deacon he served in England with Bishop Kallistos of Diocleia. On his return to the United States in September, 1995, he was appointed to the position of priest-in-charge of the church of the Annunciation of the Mother of God in Kalamazoo. He was raised to the office of Archimandrite on 12 November 1996, the feast of Saint Gregory Palamas, by Maximos, the then Bishop of Pittsburgh and became locum tenens of the Diocese of Detroit at the Monastery of Saint Gregory Palamas in Hayesville, Ohio. In September 1997, Spyridon, the then Archbishop of America, appointed Archimandrite Savvas to the church of Saint Dimitrios in Merrick, Long Island.

In 1999, Dimitrios, the newly-elected Archbishop of America appointed his former student to the post of Chancellor of the Holy Archdiocese, a post which he held for ten years.

On 11 December 2001, he was elected Bishop of Troas and assistant to Archbishop Dimitrios by the Synod of the  Ecumenical Patriarchate.

He was consecrated bishop on February 3, the Feast of the Reception of the Lord, by Archbishop Dimitrios of America, Archbishop Iakovos, Metropolitan Iakovos of Chicago and Bishop Kallistos of Diocleia and other Hierarchs of the Regional Synod, in the Cathedral Church of the Holy Trinity in Manhattan.

Bishop Savvas served as Chancellor of the Holy Archdiocese of America until 2009, when he was assigned to the post of Director of the Office of Church, Society and Culture. He has used the Internet to comment on and promote the Orthodox Christian perspective and tradition regarding contemporary and interesting issues of our social and cultural reality. He has headed  many organized pilgrimages for young people and has accompanied groups of the Orthodox Christian Students Unions from America to Constantinople and the Holy Land. He is Episcopal Representative at the OCMC (Orthodox Christian Mission Centre), as representative of the Assembly of Canonical Orthodox Bishops of North and Central America, and in this capacity has accompanied missionary groups to Turkana in Kenya and to Tanzania. He is also Chairman of the Committee of the above Assembly for matters of Church and Society, a member of the Supervisory Committee of Saint Vladimir’s Orthodox Theological Seminary, as well as Associate Professor of Dogmatic Theology, teaching subjects such as ‘Seeking God in Popular Culture’. He has taught on the educational programme for deacons at the Holy Cross School of Theology and was a member of the Board of the Saint Basil Academy.

On 3 November 2011, the Holy and Sacred Synod of the Ecumenical Patriarchate elected Bishop Savvas of Troas to the post of Metropolitan of Pittsburgh, on the retirement of his predecessor, Metropolitan Maximos.

“Through a Glass, Darkly”: Pastoral Challenges in an Age of Social Media (SKYPE call)