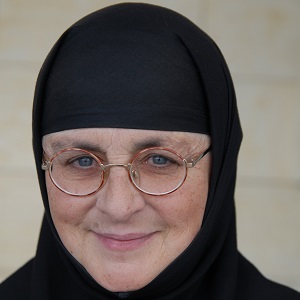 Nun Theoktisti is an Orthodox Great Schima nun at the Holy Monastery of Saint John the Forerunner in Anatoli, (Diocese of Dimitriados) Greece.

Nun Theoktisti is the author of “Ecumenism from a Perspective of Orthodox Monastic Tradition” in the Orthodox Handbook on Ecumenism: Resources for Theological Education (Regnum Books International, 2014); she has spoken at The Friends of Mount Athos’ Sixth Madingley Conference, Cambridge, England  (2013) and the Orthodox Youth Association “Syndesmos” (2001 – 2008).

Nun Theoktisti has been a missionary to Africa, and in 2012 was on the OCMC missionary team to Tanzania and is also involved with missionary work in Mozambique.

Nun  Theoktisti has a M.A. from St. Anne’s College, Oxford (1976) and has a Doctorate of Sacred Liturgy (S.L.D.) from the Pontifical Liturgical Institute, Rome (1997).

The above are the worldly values of Nun Theoktisti who for the last 30 years tries to experience – live the word of St. Gregory of Nazianz:  ΠΡΑΞΙΣ, ΕΠΙΒΑΣΙΣ ΘΕΩΡΙΑΣ (Γρηγοριος ο Νανζιανζινος).

Mission in the digital world, highlights of our experience – Forerunner’s Holy Monastery in Anatoli, Agia