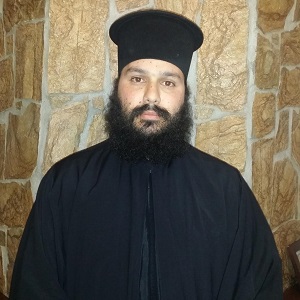 Final Study in Multimedia, on the subject of  Navigating on the Holy Mountain, (marked A)

He has worked in the following companies:

While a student at ATI, he worked in various companies, as required by his curriculum. Some of these were: GCC Compaq, Novasys, Global-soft, MM PC Master, Power-soft, and others.

Both at Α.Τ.Ι as well as at the various jobs he has done, he has worked with Visual Basic, Pascal, Oracle, Office (Access, Word, Excel) , C++ and other programmes.

At the time when he worked at Bull-NEC (A.Th.Loizou) and now in the Information department at Ethniki Asfalistiki Ellados-Kyprou, he has attended seminars on A+ and Network+ at the NP Institute in Lefkosia.

11.11.2005 Ordained deacon by the Most Holy Metropolitan Athanasios of Limassol

at the Monastery of Mahaira

29.7.2006 Ordained priest by the Most Holy Metropolitan Athanasios of Limassol at the Monastery of Saint George, Alamano

13.9.2014 Promoted to Protopresbyter by the Most Holy Metropolitan Athanasios of Limassol at the Monastery of Mahaira

Since 2006, responsible, together with Archimandrite Chrysostomos for the web page of the Holy Metropolis of Limassol.

Since 2006, responsible for the publication of the monthly periodical THE RECRUIT published also in electronic format, which is produced by the church of Saint Theodore the Recruit in Monagroulli, where he is priest-in-charge, and is responsible for the site o-tiron.blogspot.com.

Since 2012, in charge of the Anti-Heresy Office of the Holy Metropolis of Limassol and commissioner of Metropolitan Athanasios of Limassol at the Synodal Committee of the Church of Cyprus on heresies, with participation in Pan-Orthodox seminars in Serbia (2012) and Russia (2014).