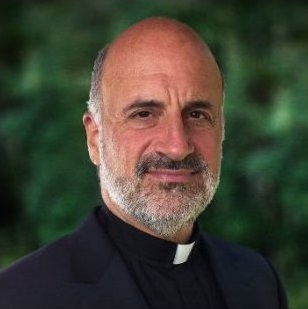 Shaped by a life of service to Christ’s Church, Fr. Christopher has dedicated himself
to using all the tools God has placed at his disposal to spread the light of Orthodoxy
across the United States of America. As founder, host, and executive director of the
Orthodox Christian Network and the “Come Receive the Light” national Orthodox
Christian radio program, he shepherds a dynamic and rapidly expanding ministry
bringing joy, hope, and salvation in Jesus Christ to over 3 million people in more than
180 countries. A nationally known radio personality, Fr. Christopher co-hosted the
groundbreaking, internationally televised Epiphany Celebration of Tarpon Springs,
Florida in January 2006, presided over by Ecumenical Patriarch Bartholomew and
seen on the Hallmark Channel. He was also featured in a 2012 television broadcast
on TLC entitled “4 Weddings.” In May 2014, he ofered the live English commentary
from Rome via Radio Vaticanna and EWTN for the worldwide televised broadcast
of the historic meeting of Pope Francis and Ecumenical Patriarch Bartholomew
in Jerusalem. On November 2014, he returned to Rome to provide the English
commentary on a second Radio Vaticanna/EWTN worldwide televised broadcast,
this time on the occasion of Pope Francis’ visit to the Ecumenical Patriarchate in
Istanbul in celebration of the Feast Day of St Andrew.

In addition to his work in media, Fr. Christopher has been the pastor of St. Demetrios
Greek Orthodox Church in Fort Lauderdale, Florida, since 1990. He ministers to a
growing fock of more than 500 families while reaching out to the south Florida
community. The parish is known for its progressive spirit and strong commitment
to Christ.

Fr. Christopher holds a Bachelor of Arts Degree from Hellenic College of Brookline,
Massachusetts, a Master of Divinity Studies Degree from Brookline’s Holy Cross
School of Theology, and a Doctor of Ministry Degree from the Pittsburgh Theological
Seminary. His dedication to the family unit drove Fr. Christopher to be certifed as a
Family Mediator by the Chief Justice of the Supreme Court of the State of Florida. Fr.
Christopher has also studied extensively at the Center on Philanthropy at Indiana
University. He has served the Greek Orthodox Archdiocese as Representative
to the United Nations and United States Missions; Assistant Priest St. Demetrios
Cathedral, Astoria, NY; Dean of the Assumption Cathedral in Denver, CO; Pastor of
the Archangel Michael Church, Roslyn, NY; Director and Dean of Admissions of the
Hellenic College and Holy Cross School of Theology; member of the Archdiocesan
Council; President of the Archdiocesan Presbyter’s Council for two consecutive
terms; and council member of the Metropolis of Denver and the Metropolis of
Atlanta. He served as Vicar of the South Florida Conference from 1998-2011. In the
summer of 2008, he was elevated by His Eminence Metropolitan Alexios to the rank
of Protopresbyter of the Ecumenical Patriarchate with the blessings of the Holy and
Sacred Synod, the highest honor bestowed on a married clergyman.

Fr. Christopher and his wife of 37 years, Presbytera Georgia Mitsos, have six children
and two grandchildren.

Digital Media – the Great Commission. Can the two collaborate?

Final Discussion by the Scientific Committee of the Conference