Warning: A non-numeric value encountered in /var/www/dmopc15.com/wp-content/themes/thekeynote-v1-00/include/gdlr-admin-option.php on line 10
 » Protopresbyter Patrick B. O’Grady 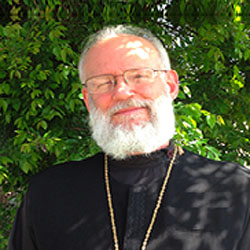 Fr Patrick is a life-long pastor, and an Orthodox priest (since 2000) now serving as priest-in-charge (since February 2007) of St Peter the Apostle Antiochian Orthodox Church in Pomona, California (USA).  In addition to pastoral duties, Fr Patrick assists the Antiochian Orthodox Archdiocese of North America by providing oversight in liturgics and writing and translating.  Fr Patrick reads Greek, Latin, German, French, along with his native English.  He speaks Spanish and some German.  He took his B.A. with honors from the University of Oregon, majoring in linguistics and classical languages; and his M.Div. with high honors from Southern Methodist University, Dallas, Texas.  In addition, he has experience in teaching at the secondary (high school) and college level, in German, Latin, and Greek.  Fr Patrick contributed to the Orthodox Study Bible (2008), and has written several articles on liturgical themes.  Two books are forthcoming in publication: a commentary on the divine liturgy for laity and a major work on the liturgical books of the Orthodox Church (co-authored), The Liturgical Books of the Orthodox-Catholic and Apostolic Church: Vol One (forthcoming, Univ. Balamand, Lebanon).  Fr Patrick is currently at work in a collaboration to launch The Antiochian Orthodox Institute, which will promote the ideals of the Antiochian Orthodox Christian faith and ethos.

Virtual reality and reality of virtue: Ethics of internet-based relationships informed by St Maximos the Confessor’s doctrine of prosopon and logoi of creatures