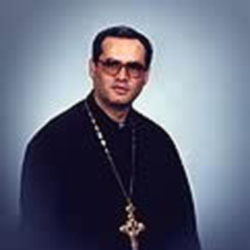 Administrative and spiritual head of a community of several thousand Arab-American Orthodox communicants, one of the largest Cathedrals in the Antiochian Orthodox Christian Archdiocese of North America.  Duties include ministering to communicants, teaching, counseling and monitoring the operation of the Cathedral office. In addition, responsible for external relations with other churches and religious organizations.

Instruct students in Church History and Patristics for the Master program in Applied Theology. Instruct students in ethical and theological issues related to parish life as part of the Doctor of Ministry program (1994-2014).  Also responsible for teaching courses in Christian/Islamic relation and Antiochian Church history , and Maximus the  Confessor.

Instruct students in Church History and Patristics for students of theology and religion.  Also responsible for reading papers and dissertations.

Transferred from Lebanon and given responsibility for the catechismal instruction of several thousand converts brought into the Antiochian Archdiocese in 1987 at Saint Athanasius Academy.  Acted in various other capacity for the Archdiocese as directed by the Archbishop while ministering Saint Nicholas Cathedral community.

In addition to professorial duties cited below, acted as head administrator for the School.  Developed curriculum and educational programs for the students in residence.  Provided pastoral and academic guidance, as well as general management of facilities.  Acted as pastor to several local parishes in the Diocese of Tripoli and North Lebanon

Teaches courses in Patristics, Antiochian Patristics, Eastern Christianity, Islamic/Christian relations and scholarly languages.  Acted as pastor to a parish in the Diocese of Tripoli and North Lebanon (1978-1987).

Acted as rector to a parish while conducting postgraduate studies.

Representing the Antiochian Orthodox Church to the WCC at various committees, including Missions and Evangelism (1983-1989) and the Faith and Order Commission (2001).

“Two Ways in the East” (in Vested in Grace, Holy Cross 2001), “An Orthodox Perspective on Yves Congar’s Book ‘I Believe in the Holy Spirit’” (delivered at the Meeting of Catholic Theologians, San Diego 2001), “Christianity and the Globalization of Culture” (Balamand 2001), “Abortion and the Orthodox Perspective” (Balamand 2001), “The Characteristics of Arabic Christian Theology” (Balamand 1999), Chaceldonian and nonchalcedonian dialogue (Annour 1986). ANTIOCH AND SYRIAC CHRISTIANITY, Antiochian Village-Ligonier Pennsylvania (further citations available upon request)

Responsible for over a dozen major translations, especially the series of Ancient Christian commentary on Scriptures 10 Volumes were published so far by Balamand University.

Fr. Michel is presently an Archpriest and Great Economos in the Antiochian Archdiocese of North America. Born in Beirut, Lebanon in 1949, he is married (wife Eva) and has three children (Theodore, Maxime and Lydia).